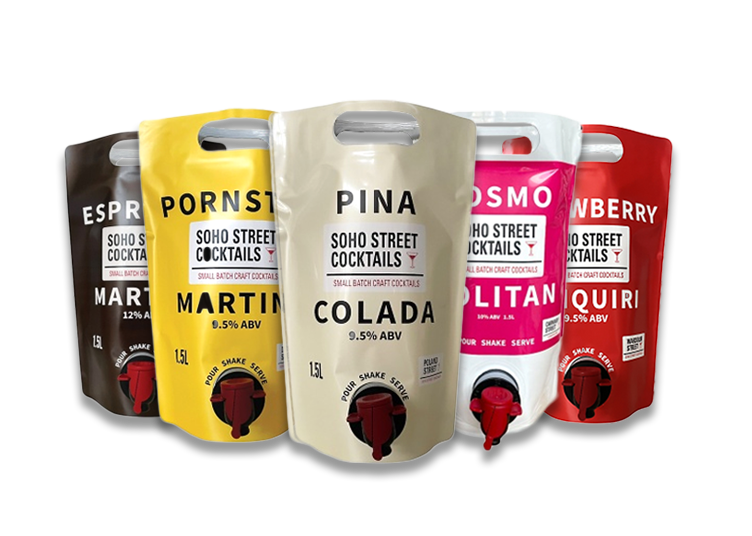 Our aim is simple. To bring the quality and craftsmanship of hand-built cocktails in a convenient, easy to serve format with ZERO wastage and a market leading shelf-life. No need for dozens of ingredients and blending equipment, we have done the hard work Bartenders don’t have to. We deliver genuine bar-quality cocktails in an environmentally sound and sustainable pouch. Simply Pour, Shake & Serve and enjoy the best ready to drink cocktail experience in the market.

We’re a bit of both.

So at Soho Street Cocktails, we make classic cocktails the way they were intended. Following the same recipes of the geniuses that invented them. Using the purest, freshest, realest ingredients just like they did.

With one tiny twist…We cram all of that magic into recyclable pouches that you can keep in the fridge.

The pouches are extremely light weighing in at only 35 grams and once opened and kept in the fridge will last 4 weeks as the product will be kept air tight, reducing product wastage. Life Cycle Assessments show our pouches to be extremely resource efficient.

We also check our ingredient suppliers credentials and even our cold brew coffee uses beans that come from an eco-roast facility. An environmentally friendly and sustainable solution which harnesses the energy from spent coffee grounds to roast the fresh beans which we buy.

The Cosmopolitan. It’s an oldy but a goody. When Toby Cecchini of the Long Island Bar in New York invented the modern-day Cosmo in the late 1980’s did he think it would become the cultural icon it is today? Probably not…The Cosmo was born with shoulder pads and big hair but became sophisti-chic in the 1990’s thanks to Carrie Bradshaw and her friends. We’ve made our Cosmo perfectly faffless. Cranberry Juice, Vodka, Triple Sec and Lime Juice are expertly mixed in our recyclable pouch. Just pour over ice into a cocktail shaker, shake and serve you’ll quickly be asking the question…
Why did we ever stop drinking them?!
1 x 1500ml pouch (10 X 150ml serves), 10% ABV.

The Espresso Martini. When world famous bartender Dick Bradsell created this incredible cocktail at the Soho Brasserie on Old Compton Street, did he think this would become one of the biggest selling cocktails in the world? We think he did. The only thing artificial about the Espresso Martini would’ve been the smile he gave people when he heard “this should wake me up” for the 300th time that day. We’ve kept it that way. Cold Brew Coffee, triple distilled vodka and our own coffee and caramel liqueur make our version of this Cocktail as real as the original. Cheers Dick!
1 x 1500ml pouch (10 X 150ml serves), 12% ABV.

Here’s three reasons why this is the UK’s favourite cocktail. 1. It tastes incredible. 2. It feels a bit naughty to say Pornstar in Public. 3. You get a free shot of Prosecco when you order it in a bar. We’ve crammed pure Ecuadorian Passion Fruit puree, triple distilled vodka and vanilla into a recyclable pouch that you can keep in the fridge! We only use the good stuff, there’s no artificial colourings or flavourings in our drinks. We keep our version of this Cocktail true to the original, just the way the inventor, Douglas Ankrah, intended. Cheers Doug!
1 x 1500ml pouch (10 X 150ml serves), 9.5% ABV.

The Piña Colada. The story goes that in 1954, bartender Ramón “Monchito” Marrero of the Caribe Hilton in San Juan created a new cocktail that mixed rum, coconut cream and pineapple juice - and the Piña Colada was born! In 1978, the Piña Colada was declared the official drink of Puerto Rico. Our version of this classic cocktail combines premium coconut milk with NFC pineapple juice and Caribbean rum. The outcome is a perfect Piña Colada that is pure holiday in a glass!
1 x 1500ml pouch (10 X 150ml serves), 9.5% ABV.

The Strawberry Daiquiri. A happy mistake. In 1860’s Maryland, USA, during a rum-fuelled party an Ice-Cream maker and Strawberry farmer named Christian Zacharias, decided to mix the strawberry puree for his ice-cream with contraband British Navy rum. The increasingly tipsy frolickers not only tested and perfected the smoothest mix of strawberries, rum, and ice, but they also utterly destroyed Mrs. Zacharias’ strawberry patch! It’s no mistake that we’ve crammed the freshest Strawberry puree, Caribbean Rum and Lime Juice into our recyclable pouch, keeping our version of this classic cocktail as real as the original.
1 x 1500ml pouch (10 X 150ml serves), 9.5% ABV.

Login for prices
0
We use cookies to ensure that we give you the best experience on our website. If you continue to use this site we will assume that you are happy with it.OkPrivacy policy