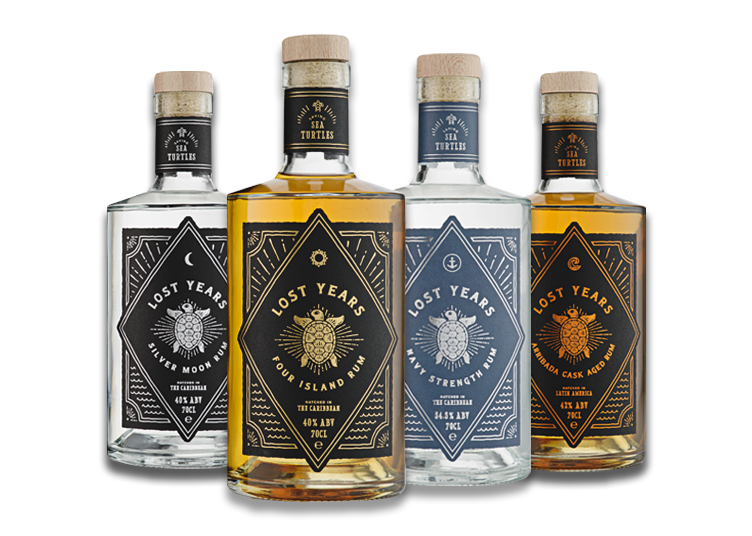 Lost Years is a rum brand with a purpose – a range of exceptional Caribbean and Latin American rums devoted to saving endangered sea turtles.

Lost Years Rum was launched by husband and wife team Lee & Trudy Smith in November 2020. The idea was hatched on a family holiday in Jamaica, the Caribbean island famed not only for its fine rum, but also for its sea turtles. The pair can’t take all the credit though – the inspiration in fact came from their young son, Billy, who has adored sea life and particularly sea turtles for as long as he can remember.

Every year thousands of newly hatched sea turtles scurry across tropical beaches and disappear beneath the waves. They won’t be seen again for up to a decade. Where they go during these ‘lost years’ is one of nature’s great mysteries, but what we do know is that these ancient creatures are today in danger of extinction and, without our help, could soon be lost forever.

So join us and let’s raise a glass to saving these incredible creatures. Every bottle of Lost Years rum you buy saves baby sea turtles by supporting community-based conservation efforts at key nesting sites across the Caribbean and Latin America. We’ve already helped more than 25,000 baby sea turtles begin their own journey into the ‘lost years’, but with your help we aim to save more than 1 million over the next five years.

The multi award-winning Lost Years range comprises world class white and golden rums sourced from some of the most revered distilleries in the Caribbean.

Pure and unadulterated, they have no added sugar, colouring or flavouring and are both vegan-friendly and gluten free.

Our multi award-winning signature blend, Four Island, is a union of world-class single estate rums made from two different base ingredients, molasses and fresh sugar cane juice. We’ve married three wonderful barrel-aged rums – an eight-year-old rum from the legendary Foursquare Distillery in Barbados, a five-year-old from the Dominican Republic and a two-year-old pot still rum from a multi-award-winning estate in Jamaica.
6 x 700ml bottles per case. 40% ABV.

Our signature unaged rum comes straight from the world epicentre of rum, the beautiful Caribbean islands of Jamaica and Barbados. A pure blend of traditional Coffey column still rum from one of Jamaica’s most famous distilleries, married with a high-ester pot still rum from Barbados, Silver Moon is a light bodied yet flavour-packed rum with the natural sweetness of molasses. Try it with tonic for a great G&T alternative!
6 x 700ml bottles per case. 40% ABV.

For a stronger unaged rum, try our award-winning Navy Strength, bottled at a formidable 54.5 percent ABV. Recently named ‘Master’ in the white overproof category of the Rum & Cachaca Masters 2021 Competition, our top-of-its-class white is a potent yet gloriously smooth tropical rum which makes the perfect base for numerous cocktails.
6 x 700ml bottles per case. 54.5% ABV.

Lost Years Arribada is a luxurious blend of fine aged rums from Panama, El Salvador, Venezuela, Nicaragua and the Dominican Republic. Column distilled and tropically aged in white oak barrels for between five and eight years, the result is a wonderfully mellow, warm and spicy Latin American rum which can be sipped neat or enjoyed any way you like it. Naturally dry in finish, it's already proving a hit with whisky drinkers!
6 x 700ml bottles per case. 42% ABV.